I moved back home a couple of months ago. I had spent the last two years yearning to return, but I have found my short time back quite difficult and rather triggering to say the least. Most people will quickly jump to the conclusion that this is in part related to the country’s economic situation and even the political situation but it is actually more to do with the socio-cultural environment that the country presents to a young returnee of strong Afro-consciousness convictions.

I am especially saddened by the blatant self-perpetuation of anti-black ideology that exists in Zimbabwean society and subsequently Zimbabwean thinking particularly when we speak of how we value, or rather, don’t value Afrikan traditional philosophies and indigenous knowledge systems. In his book Peau noires, masques blancs (Black Skin, White Masks), Martinique postcolonial theoretician Frantz Fanon points out how colonialism entrenched the belief that the culture, history and belief and knowledge systems of the Western colonisers are universal and normative as well as superior to that of the colonised. As a result of this indoctrination, the colonised ended up adopting the coloniser’s identity and thinking as their own. In Zimbabwe we see this manifest itself in various ways and spaces and this includes the language we use to refer to ourselves and other non-Europeans in an attempt to position the subject in a place of inferiority which is often self deprecating and denigrating e.g. the colloquial Shona word mabhoyi or the phrases house girl or garden boy.

In 2012 there was much dismay from the Zimbabwean public when the University of Zimbabwe’ s School of Pharmacy introduced a six month course for traditional healers. Phrases like “it is barbaric” and “it is demonic” were thrown around by people who are descendents of the originators of the country’s ATM customs. What is interesting to note is that the World Health Organisation (WHO) was not only in support of this move, but it is also actively involved in its actual facilitation. In fact, as early as at the onset of independence in the country, the international body was already making recommendations of the need of such an elevation of ATM in the country’s plans for itself going forward. Of course, this push for the recognition of traditional medicine was not without its controversies thanks to the “reduction of its status under colonialism and the co-existence of a modern health care sector that remained convinced of its pre-eminence” points out Gloria Waite in her paper Traditional Medicine and the Quest for National Identity in Zimbabwe (2000).

Although I was raised Christian and had a Euro/colonial centred upbringing and culturalisation (as with most other urban and middle class Zimbabweans of my generation), I now identify as an Afrocentrist afro-spiritualist and it is because of this and my calling to be a sangoma (spirit medium/ traditional healer) that most of my time here has been spent connecting with the traditional spiritual and philosophical cultures of our ancestors. My black consciousness politics and my spirituality are inextricably linked and that is perhaps why I have chosen to follow the path of our indigenous Afrikan systems of faith as opposed to the Christian one of my family and the majority of the country. This is primarily because I refuse to buy into imperialist ideological claims concerning the alleged inferiority of the Afrikan in every aspect of our ontology including the religious and cultural. Much the same way it is undeniably false that we were not civilised pre-first contact with the Europeans and Arabs, it is also false that we did not know the Creator.

There continues to be a lot of stigmatisation around consulting sangomas in Zimbabwe. Incidentally, or perhaps ironically, quite a lot of people across the classes in the country still make use of their services, albeit clandestinely. Unsurpringly, Afro-spiritual tradition continues to exist in the periphery of mainstream society further marginalising and creating a sense sinister mystery for its practitioners and devotees. 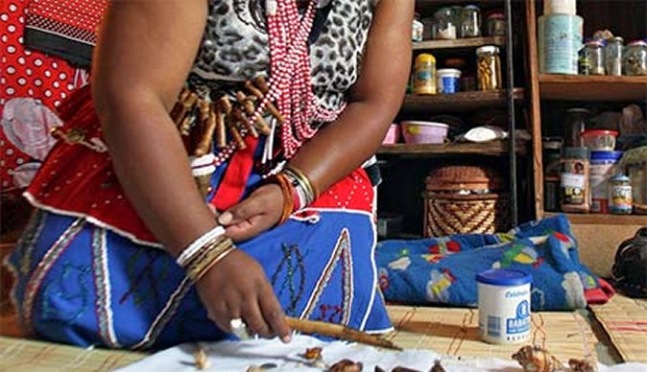 What makes this scenario particularly unfortunate is that a country often lauded by fellow Afrikans for being the beacon of modern anti-colonial “revolutionality”, a lot of us refuse to acknowledge let alone embrace indigenous knowledge systems, not only as forms of resistance/ postcolonial theory but also as forms of empowerment and identity. We view them as anti-progress and anti-civilisation re-establishing colonialist hubristic dismissals of them used to justify the onset of the imperialist expedition into various parts of the world inscribing the inferiority of the colonised and in turn, the superiority of the colonisers.

Emancipating ourselves from (mental) slavery

What a lot of us fail to do is appreciate the resilience of these very important aspects of our identities as black Afrikans. They have refused to die despite conquest and have managed to survive for generations in various ways which include through the use of camouflage, as it were, and hiding in plain sight by embedding themselves in now more socially accepted spaces like the arts, proverbs and parables as well as Christianity itself with some of its appropriated “pagan” rites and rituals. It is only when presented in these vestiges of colonialism, that a lot of us will dare to engage (openly) with these indigenous forms of knowledge and culture. We view them as things to be superficially enjoyed and discarded as it is something that now exists outside of our ontology. It has been cultivated and “civilised” out of us in order for us to become more European or at the very least, approximate Europeanness.

Afrikan knowledge and philosophies are often dismissed as being empirical, superstitious and devoid of any reason, not just by non-Afrikans but by us Afrikans ourselves. As some Afrikan academics such as Mabogo More and WJ Ndaba have acknowledged, this state of non-philosophicalness or non-sophisticatedness is a peculiarly Afrikan situation which is not only assigned to us by non-Afrikans but is also claimed by us. The same can be said for Afrikan spiritualities which are often misunderstood/ill-understood, demonised and vilified against the backdrop of a European cultural and religious hegemony.

The internalised hatred for indigenous Afrikan knowledge, philosophies and religions permeates the very soul of our people and our cultures ultimately determining the nutritiousness or alternatively, the toxicity of said cultures. Not too long ago, Arthur Chatora touched on this when he tackled the issue of hunhu (one of our dominant philosophies) in today’s Zimbawe. In many debates concerning what informs the Afrikan identity/ies today, some have denounced the importance of looking back to our pre-colonial past as a repository of potentially positive and useful tools to be extracted for use in today’s Afrikan nations in order chart our way into an ideally more empowered and developed future. I, obviously, believe that is the very thing we must do if we are going to solve our problems.

The belief that there is nothing of value in our pre-colonial past reinforces the “nothingness” attached to blackness by anti-black imperialism, suggesting that the only way to legitimise black bodies and thought is to always have them in relationship with white bodies. We need to see the importance of making ourselves subjects of history and civilization and not just mere objects who only came into existence and worth during imperialism.

Jacob Mapara, in his paper Indigenous Knowledge Systems in Zimbabwe: Juxtaposing Postcolonial Theory, argues that is a way of reclaiming the dignity and humanity that the formerly colonised were robbed of as well as a way of “asserting equality to the former colonisers” and I tend to agree with him.

I leave you with some food for thought from one of the greatest philosophers of my generation, Ms. Erykah Badu from her song Twinkle on her 2008 album New Amerykah

Amen Khum Ra on the song “Twinkle” in Kemetic says

Which (for those of you who are easily freaked by ancient Afrikan languages ;)) translates to:
We the brightest light, born from the deepest black, children of the Divine Mother Father, true right and exact, open the way shining ones, open the way, listen to these Divine words I say.

I am the infinite blackness, the infinite brightness, the All Awareness, forever establishing the field of truth and reeds, through unifying the two Worlds.

2 thoughts on “Beneath the surface: In search of Afrikan knowledge & greatness”